Today is the official start of summer, and what better way to celebrate than with a good, old-fashioned glass of lemonade!

Little neighbors from across the country are taking advantage of the summer heat to make a few bucks and help their neighbors stay cool with delicious lemonade. But more importantly, they are pursuing their entrepreneurial spirit and learning important life lessons.

Over the past several weeks, the Nextdoor team has been inspired by the thousands of members who have shared their stories about how their little entrepreneurs are using lemonade stands to raise money for important causes this summer.

From gaining valuable customer service skills, to practicing money management, to grasping the importance of giving back to one’s community, these kiddos are becoming better neighbors – one squeezed lemon at a time!

Here are a few of our favorites: Leo, an adorable 3-year-old boy from St. Louis, has been fighting Leukemia for 6 months and is sadly on his last round of possible treatment with few chances of full remission. Eager to do something to help, Colleen Sneed, cousin to Leo’s mother Erin, asked her 4-year-old son Jacob if he’d like to set up a lemonade stand to help raise money for Leo. Jacob jumped at the opportunity to help Leo, so together mom and son built ‘Leo’s lemonade stand’ and began fundraising. Colleen posted on Nextdoor to let her neighbors know about the fundraiser, and the response was overwhelming. Over three days, Jacob made over $500 for Leo and his family. The stand was such a success that Colleen’s nieces decided to host their own lemonade stand for Leo. Leo’s chances at remission are still uncertain. If you’d like to donate to Leo’s family and cancer research, you can do so here. Lorenzo Rhynes, a disabled veteran in Memphis, TN, has lived in the same home for 19 years. But in recent years, he’s developed cerebellar and macular degeneration, which has made it hard for him to move around his house and get to his various doctor’s appointments. Seeing an opportunity to help a neighbor in need, Selena Silvestro and her local group called Little Helpers hosted a lemonade stand over Memorial Day Weekend to raise money for Lorenzo. They raised just over $800 and kicked off a YouCaring donation page  to continue their fundraising efforts. And, after seeing Selena’s post on Nextdoor, four separate construction companies offered to donate $15,000 worth of supplies to build Lorenzo a wheelchair accessible shower and a new garage door. Kansas City resident, Alexa Fuller, recently joined a Relay for Life team to benefit the American Cancer Society. After talking with her daughters  (ages 9 & 7) about the cause, they decided to host a lemonade stand to help Alexa’s team raise money. Along with some other friends who were also on the team, Alexa and her girls decided to host a unique lemonade stand – in addition to the usual lemonade and cookies, they hand made items such as flower pens, bookmarks and stress-reliever balls, to sell alongside the sweet beverage. They posted their stand on Nextdoor and neighbors came flocking with donations in hand. Overall, they raise more than $300 for Relay for Life.

To see the other lemonade stands popping up across the country, check out the slideshow below. 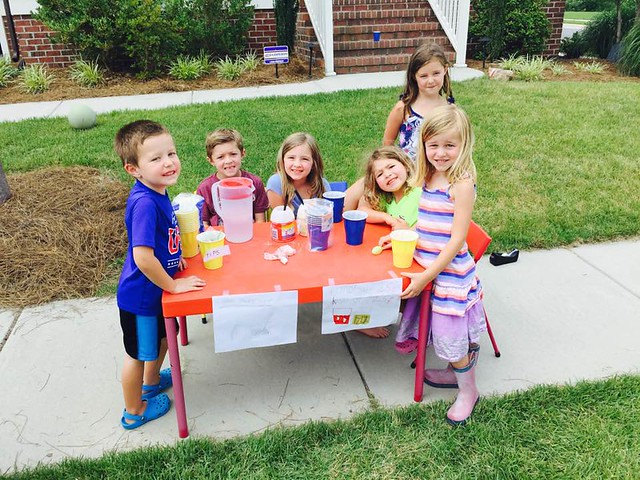