We’ve partnered with baseball All-Star closer Kenley Jansen to find some of the best neighbors in L.A. who have given back to their communities in amazing ways. Over the past several weeks, hundreds of L.A. residents have nominated their neighbors for the title of L.A.’s Neighborhood All-Star, and we have been truly inspired by their stories.

After careful review, we’ve picked four finalists who are in the running for the All-Star title. The winner will have the opportunity to meet Kenley, and Nextdoor will also give them $1,000 to give back to their community in a way of their choosing.

If you’re a Nextdoor member in the greater L.A. area, check out the finalists’ stories below and make sure to cast your vote for the neighbor who inspires you the most. Voting closes on Friday, September 15. George Contreras has always loved basketball, and a year and a half ago he found a way to combine this love with a way to give back to his community. Based in East L.A., George identified a need for a safe place for kids to play basketball. He knew that there were many city teams that gave youth a structured environment to play basketball, but some kids could not afford to be part of these teams or did not meet the required skill level.

That’s when George decided to start his own volunteer basketball program, East L.A. Basketball Club, where he could help train youth so that they could eventually join the city teams. He spread the word to friends and family and started out with 15 kids. Over the past year and a half, that number has now grown to 180 kids.

George and a few volunteers spend three days a week in a gym with roughly 50 kids coaching them in basketball – but also in life. George knows that the time he spends with these kids is an opportunity to teach them important life lessons, such as the power of education, the importance of exercise, and the value of being a kind person.

If George wins the Neighborhood All-Star honor, he will use the $1,000 to purchase much-needed basketball gear for his team and keep the gym doors open so that he can continue to offer this program to more kids in the future.

If you think George deserves the title of L.A.’s’ Neighborhood All-Star, please vote for him here. In 2016, Fred attended a church service where he was challenged to list the neighbors who lived around him. After realizing he knew none of his neighbors, Fred – a self-described introvert – stepped out of his comfort zone and decided to make an effort to meet his neighbors.

Fred started by reaching out to the local police department for help. They suggested starting a neighborhood block watch, so Fred reached out to his Monterey Park neighbors and invited them to his home to kick off a block watch. He has since hosted numerous block watch meetings at his home, and also expanded the block watch to the nearby elementary school. Looking for another opportunity to unite his neighbors, Fred organized a neighborhood’s first block party for the 4th of July. Over 50 neighbors attended, and the event has now become an annual festivity for the neighborhood.

In addition to taking ownership of these larger neighborhood initiatives, Fred also oversees the cleanliness and safety of his neighborhood and frequently reports items that need fixing. He can oftentimes be found delivering newspapers to neighbors’ doors or taking in neighbors’ trash cans off the curb.

If Fred wins the Neighborhood All-Star honor, he’ll donate the $1,000 to the local Bella Vista Elementary School in his neighborhood. Bella Vista Elementary School has begun a fine arts program with the help of the Wallis Annenberg Center for Performing Arts. The school will use the donation to purchase percussion instruments so all of the students have the opportunity to learn to read and play music.

If you think Fred deserves the title of L.A.’s’ Neighborhood All-Star, please vote for him here. In 1989, Eric Shepard moved to Newport Beach and began working for the United States Postal Service, a job that quickly made him a staple of the Newport Terrace neighborhood, where he delivers mail each day. For 20 years, Eric has graced the neighborhood with a friendly smile, a helpful hand, and a watchful eye that gives neighbors peace of mind. Eric always keeps an eye out for any suspicious activity in the neighborhood by checking on homes and cars for neighbors who are not home. He also has a keen sense of the happenings of the neighborhood since he walks the same route every day, and is the first to know if there is an issue that several neighbors are facing, which he then elevates to the HOA.

Eric also has many businesses on his route, and is often able to connect residents to these businesses if their services match a neighbor’s need. Because Eric knows almost everyone – including what they might need help with or what talent they might be able to offer – he has opened the doors for neighbors, who might have never met, to help each other and get to know one another.

If Eric wins the Neighborhood All-Star honor, he will use the $1,000 prize from Nextdoor to host a neighborhood networking event to connect the local business on his delivery route with residents from the Newport Beach neighborhood that he also serves. He will also donate a portion of the money to a dear friend’s daughter who is battling a life-threatening disease.

If you think Eric deserves the title of L.A.’s’ Neighborhood All-Star, please vote for him here. Many years ago, Barbara Gray began experiencing back problems that required two back surgeries. She was in and out of physical therapy during this period, which her insurance luckily covered. While in physical therapy, Barbara began to wonder about the hundreds of people who were injured and couldn’t afford physical therapy or medical equipment. From her own experience, she knew that any individual with severe pain would not be able to work or provide for their families until they received care. She also knew that many recovering patients had equipment they no longer needed and could be donated to people in need.

That’s when Barbara decided to launch Physical Therapy for All, a nonprofit that collects physical therapy equipment and donates it to people in need, free of charge. The organization also fundraises to pay for physical therapy sessions for those who cannot afford it. In 2012, Barbara started collecting equipment from recovered patients and senior centers, and was soon forced to rent out a storage facility to hold all the donations. Now, she works with community health clinics and social workers across Southern California to place donated equipment with patients in need. Her all-volunteer organization has collected and donated over 1,500 pieces of durable medical equipment, including: 500+ walkers & rollators, 300+ pairs of crutches, 200+ wheelchairs, and over 65 hospital beds. Barbara has also partnered with numerous physical therapists who have agreed to substantially lower their rates, which Physical Therapy For All pays on behalf of the patients. In addition to SoCal, Physical Therapy for All has helped send equipment to Haiti and Mexico.

If Barbara wins the Neighborhood All-Star honor, she will use the $1,000 prize from Nextdoor to pay for physical therapy sessions for patients in need, or towards expanding their physical therapy equipment donation abilities.

If you think Barbara deserves the title of L.A.’s’ Neighborhood All-Star, please vote for her here.

Remember to cast your vote for the L.A. Neighborhood All-Star by Friday, September 15, and check back in to find out who won!

For more photos of these wonderful neighbors, check out our slideshow below! 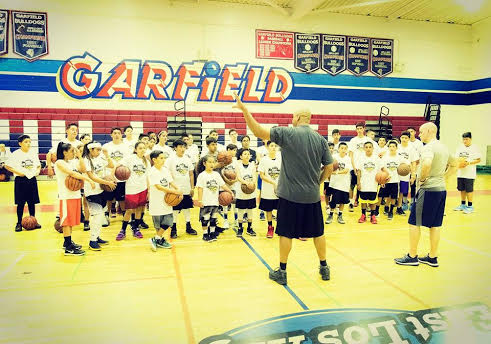