We began our Summer of Good Neighbors Tour where it all started for Nextdoor – our very first neighborhood: Nextdoor Lorelei in Menlo Park, CA.

Since then, we’ve visited eight other communities across the country, celebrating communities and the neighbors that make them great. Along the way, we stopped off in Tulsa, Oklahoma; Austin, Texas; Columbus, Ohio; Memphis, Tennessee; Lake Oswego, Oregon; Cambridge, Massachusetts; Boise, Idaho; Arlington, Massachusetts, and now – last, but certainly not least! – Dallas, Texas.

Today, nearly 100 neighbors joined us on the final stop of our summer tour in Nextdoor Belmont Addition. Our Co-Founder, Sarah Leary, was honored to be in attendance celebrating this community and the neighbors that make it great with Dallas native, Jenna Bush Hager, and the Dallas Police Department. Jenna and the recipients of the Nextdoor Real Simple Good Neighbor Award!

We were happy to partner with our friends at Real Simple to honor good neighbors in Dallas who are making a difference in their neighborhood. After hundreds of nominations, it was our pleasure to give the Nextdoor Real Simple Good Neighbor Award to the Martinelli sister-in-laws.

Meagan and Kim Martinelli rallied the neighborhoods of Merriman Park Estates and Lake Ridge North last year around a fun run that hits close to home for these sister-in-laws, who are married to twin brothers. Kim and Meagan have five boys between the two families, including Thomas, who has a genetic disorder. Thomas’s mother, Kim, was training for the Dallas Marathon and raising money for the Global Foundation for Peroxisomal Disorders (GFPD). Meagan and Kim’s boys kept saying they wanted to do a race, too, so Meagan came up with a fabulous idea: to host a kids fun run through the neighborhood for the GFPD in honor of Thomas.

Meagan turned her driveway into a race registration area to collect donations, and friends and neighbors came out of the woodwork to support the cause. Neighbors plotted out a mile-long course around Merriman Park Estates, and the kids ran their hearts out. Racers, who ranged in age from 3 to 12, enjoyed a bounce house, hot chocolate, and cheering from a local middle school cheerleading squad. According to Mary Hope Burns, the neighbor who nominated the Martinelli sisters, the fun run raised over $10,000 for the GFPD. The kids had a blast running the race and raising money from their friends, parents, neighbors, and grandparents.

“Kim and Meagan’s story is inspiring for neighbors and neighborhoods everywhere,” our friends at Real Simple shared. “Better yet, it’s something that others can replicate in their own communities for causes that are close to their hearts.”

For more pictures of the race that the Martinelli sisters organized in their neighborhood, check out this album below! 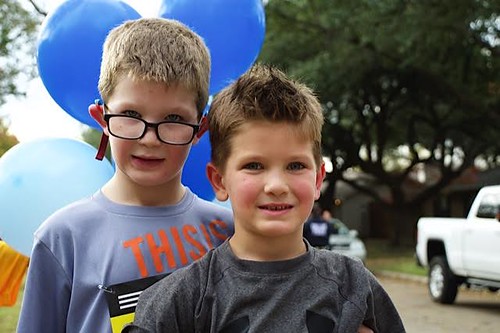 Thank you all for joining us on our Summer of Good Neighbours Tour. It has been such a honor to celebrate great neighbors and their communities all over the United States these past few months. From all of us at Nextdoor, thank you for helping to build stronger and safer neighborhoods.